Windows 10 has vastly improved and is considered a better upgrade than the execrable Windows 8. But since a lot of functions have been nixed, there is a room for new features. Sadly, unlike Android, the app collection in Windows Store is still ludicrous and most of the time we don’t get what we are looking for. Say, screen-recording for instance. There are slim chances you will find a good screen recorder for Windows 10 but we will give you some definite options so you don’t have to hunt the internet.

Some of the techniques to use a screen-recorder is hidden right in your Windows 10 operating system while others are third-party apps. If your work involves a lot of screen recording, then we say go for the professional software as they will enhance your experience by including more customization and added functionality. And if you seldom indulge in recording your screen, opt for the free ones as they also offer basic albeit appreciable functions.

How to Screen-record on a Windows 10 PC 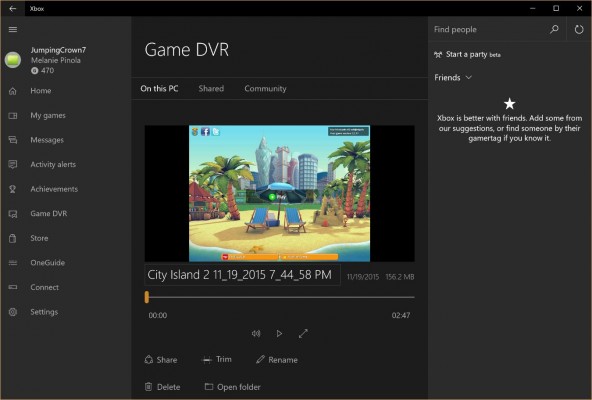 The Xbox app lets you record your screen. Doesn’t matter if it’s gameplay you want to show off or the tutorial to guide your friend on how to edit a video, this tool will suffice all your needs and you don’t even need to download it as Windows rolls it as a pre-installed app so if you have a Windows 10, time to explore the uncharted territory. Keep in mind though, the program can’t capture an entire desktop or File Manager but works in regular apps.

Before you proceed, ensure your PC has Intel Quick Sync H.260, Nvidia NVENC, and AMD VCE or else screen-recording via the Game Bar won’t be possible even if your PC has Windows 10 installed. If your PC matches the requirements, go ahead!

Keep the program to be recorded open. Press Windows + G to summon the Game Bar dialog. Click on the Yes, this is a game” checkbox to open the app.

Having captured the contents of your screen, end the recording by clicking on the red recording bar on the top right of the program window.

All the recorded clipping will be in the main application under the Videos folder in a subfolder called Captures. It will also be found in the Xbox app under the Game DVR menu which lets you trim the video and share it on Xbox live, although it should be a game. 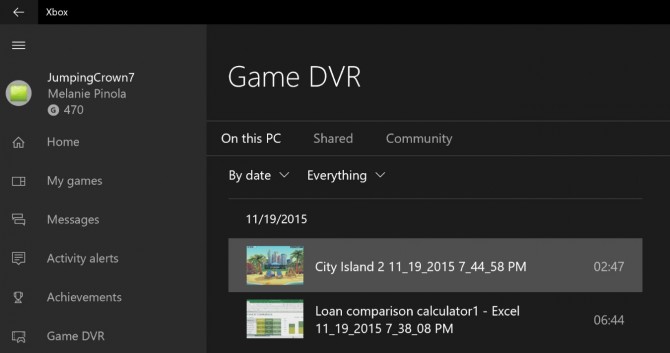 You can also take screenshots using the Xbox tool by pressing Windows Logo+Alt+Print Screen or by clicking on the camera button on the toolbar.

You can even see the notification in the Action Center. 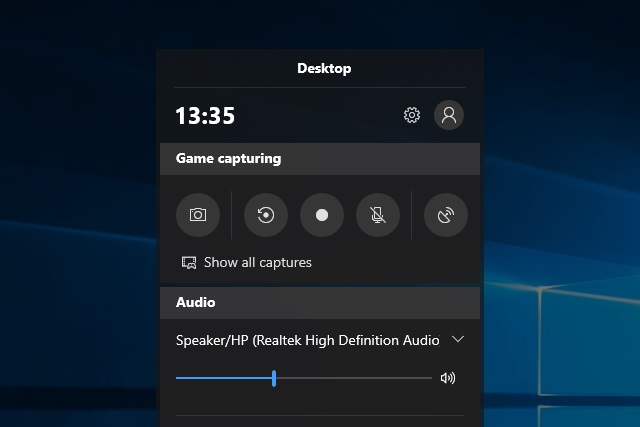 Shocked right? Yes, Microsoft PowerPrint 2016 gives you an option to record your screen and many people don’t know about it.

Open the application, select any template and head to Insert tab. Once there, select Screen Recording. Select the area on your screen to record or press Windows Key + Shift + F to record the entire screen. Click on the Record button or simply press Windows key + Shift + R. Select Pause to pause the screen-recording and click on Stop to end the recording. You can either embed this file or save as an individual file. However, the editing options are a bit limited so use this option if it’s a quick thing. Also, don’t forget to take advantage of the PowerPoint video effects that will enhance the video. 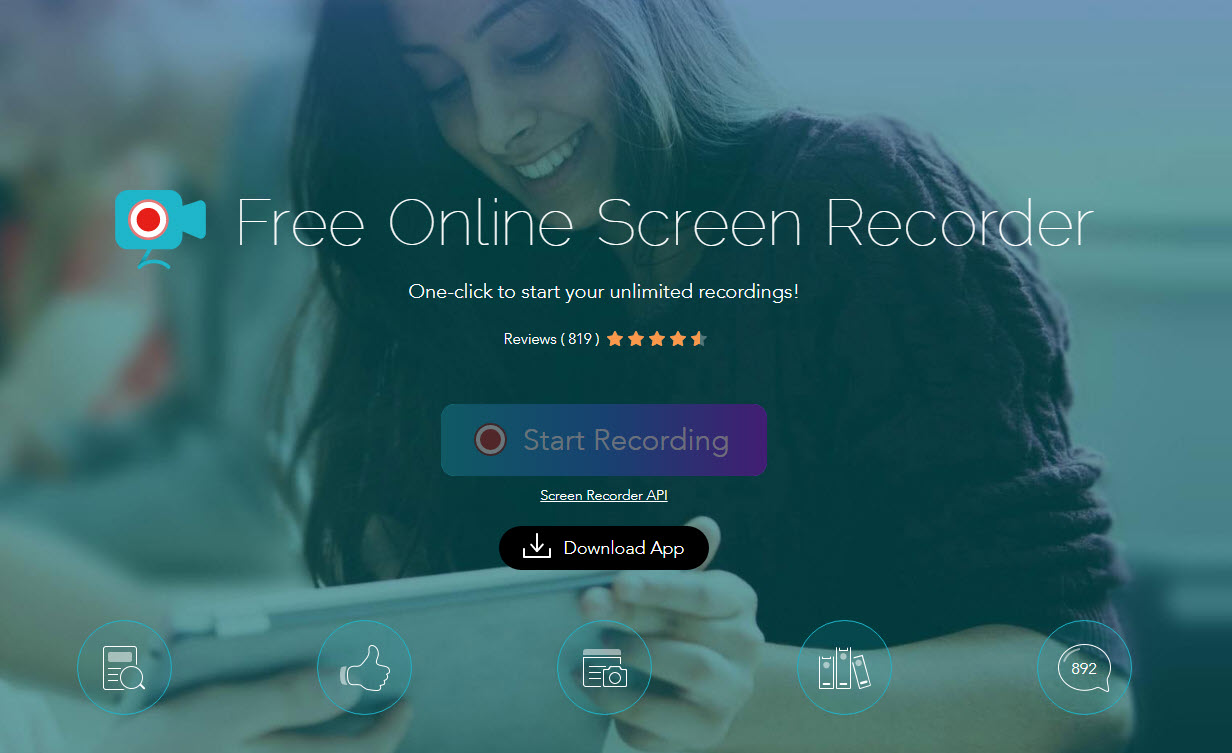 Apowersoft is a time-saver. You don’t need to install this application, just open the website and record in real-time with any browser.

To use it, go to the website and click on Start Recording. A pop-up message will appear ‘Launching.’ You’ll have to download an application which isn’t a desktop app. Once downloaded, a recording toolbar will present itself.

The online screen recorder is effective and has a lot of tools like selecting the whole screen or just an area, adding annotations (excellent for presentations and tutorials) or record from a webcam.

Once the contents of your screen are recorded, press the pause button. The output video will be saved in MP4 format in your documents folder. 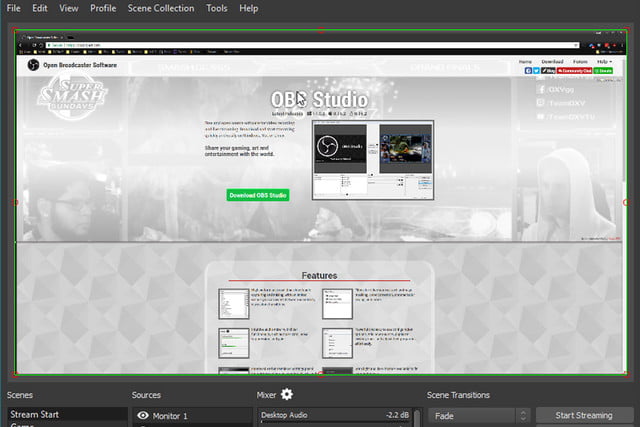 OBS Studio leans towards the professional, game-oriented genre of the screen-recorders. Even though you’d hear about it mostly from gamers, it proves to be a great tool as a standalone screen-recorder. You get streaming functions for broadcasting your gameplay live, a 60FPS recording option, and much more. You’ll find OBS Studio more feature-packed than some of the premium offerings. The app is heavily customizable and hence takes a bit of time to get used to. Also, there’s no built-in video editor, so that might be a deal-breaker for some. Download and install the OBS Studio. Set it according to your needs and start recording your screen. 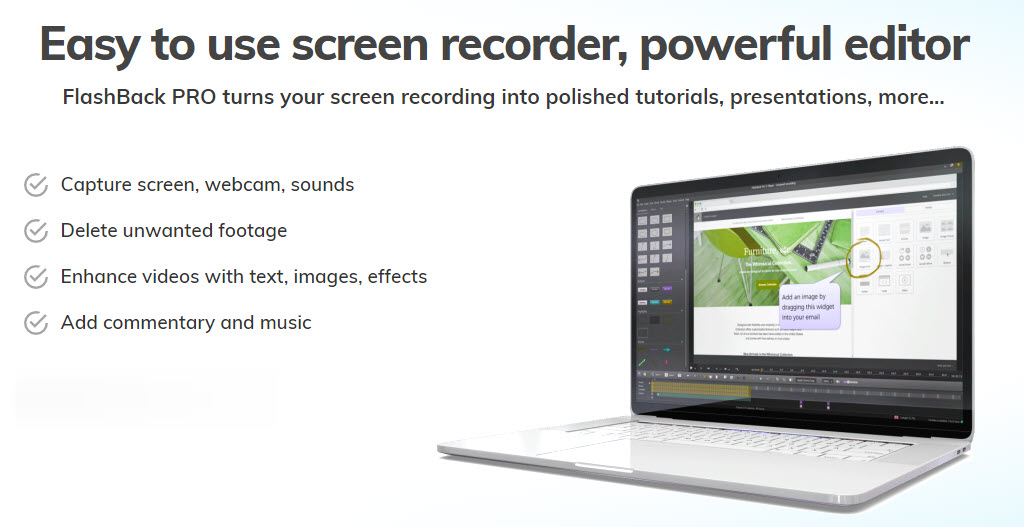 If the other options don’t work for some reason or you just want to try more till you find the app you are looking for, then the FlashBack Express will satisfy your proverbial thirst. The app is flexible and will suffice all your screen-recording needs. There are two versions to choose from – Express and Pro. You’ll have to shelve some cash to get the Pro version but the basic variant will get the job done.

Download and install the software. Open the app you want to record. Fire up FlashBack and click on Record your screen, which has a lot of customizable settings. They include the options of recording the entire screen or a specific part of the screen, or even your webcam. Select the audio output – speakers, microphone or both. The other unsung features include replacing passwords with asterisks, limiting recordings by time or size, etc. Once you’ve done recording, play the video and trim or crop it in the edit section.

The free version, Flashback Express, offers tonnes of features like adding a webcam to your footage or audio commentary. It also has no limits when it comes to the length of recording. We think FlashBack Express is the best way to screen-record on a Windows 10 PC. 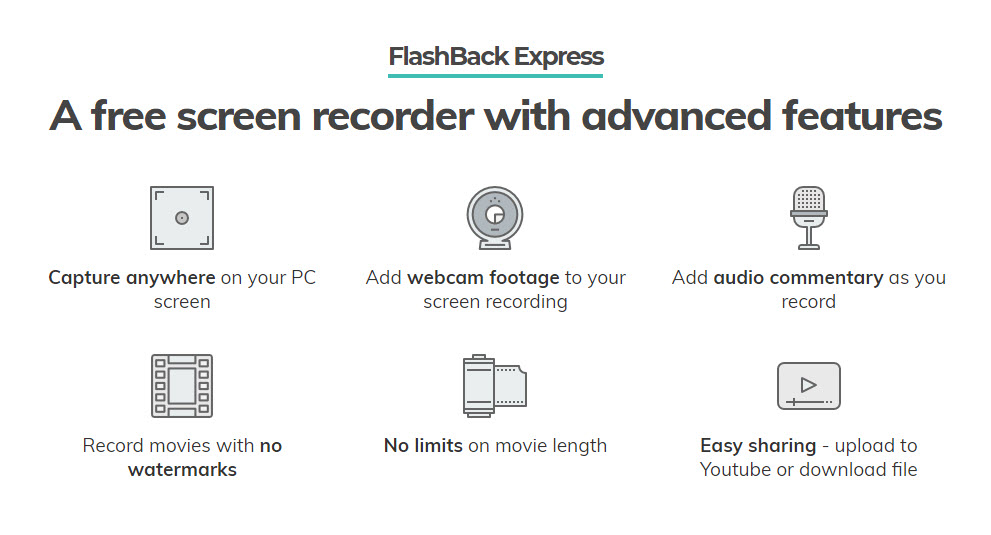 Well, we’ve covered Snagit in our article explaining multiple ways to take a screenshot on Windows 10, and we are pretty impressed by it. Even though you’ll have to pay ₹4,000 ($50) after 15 days of trial, it’s worth every penny. Heck, we’ve been using this app for almost all our articles. Even though it is a great tool for taking screenshots and customizing images, you get a screen recorder too. You don’t have to download another app for it. Though the options are kind of basic so if you expected there will be a lot of preferences, there aren’t. Download and install the app. When it’s opened, you’ll see a small dialog box containing all the shortcuts to take a screenshot or recording the screen.

Click on the Video on the left-hand side. You can customize the audio and webcam options. Head on to Selection to capture either a part of your screen or an entire window.

Press on the Presets option. This lets you create your own shortcut for summoning up a screenshot technique. For instance, if you want to record your screen with just a combination of your keyboard keys, set a hotword, name the preset and configure it. Next time you have to record your screen, just press the hotword (Shift + V in our case). 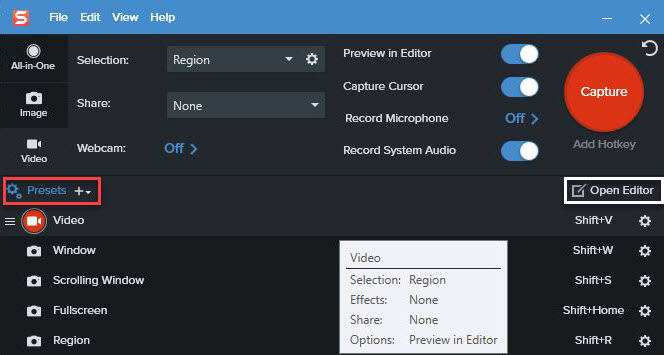 Once you press the shortcut for recording your screen, drag the corners highlighted in the screenshot below to wherever you’d want to. Then press on the record button. 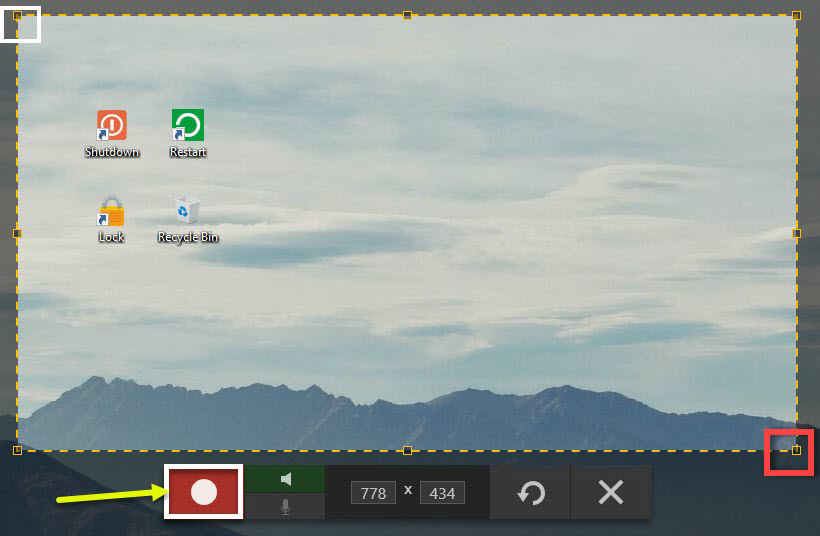 The trial software has access to all the features so that you can use them and decide whether or not to buy it.

Effects? Check. Transitions? Check. Live Annotation? Check. Full-fledged editor? Yes, check! And no, I’m not talking about an Adobe software here. It’s another program by TechSmith, whose Snagit (covered above) is a hit for taking well-planned screenshots. Camtasia is by far the best screen-recorder you can get. And for the best features, you’ll have to pay the bucks, which will cost you ₹20,466 ($295). Camtasia offers you everything. It’s a complete package and the ruler of the screen-recording world.

Download and install the trial. Open the app. On your screen, you’ll see screen recording controls and a drag option to adjust the area of your screen. Drag the green corners, set your preferences and click on the record button. 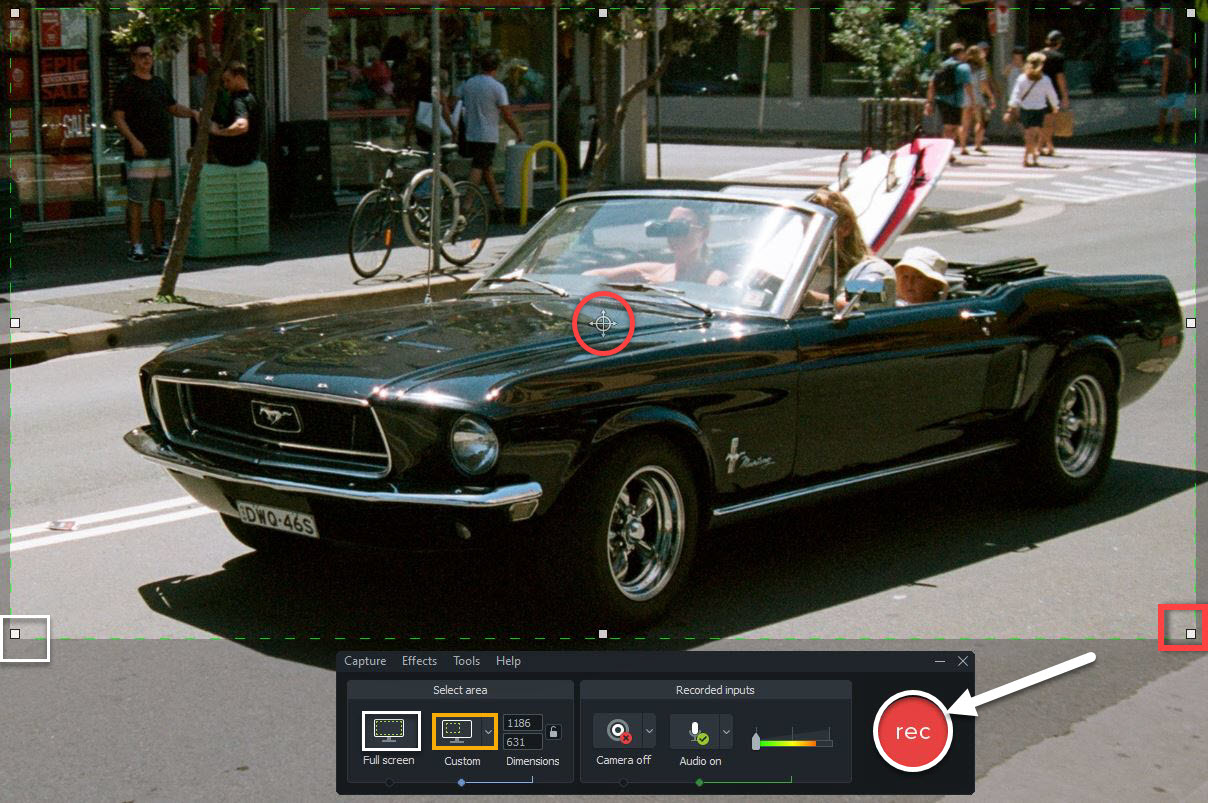 Like Snagit, you will get a head-start of 3 seconds before the recording begins.

While the screen is being recorded, you’ll get the following setup:

You can stop the recording by pressing F10 on your keyboard. After you stop the screen-recording, the Camtasia editor will be on your screen. This has a lot of tools and can be used as a standalone editor as well. There are transitions, annotations, narration, video effects, and animation for zooming in or out. 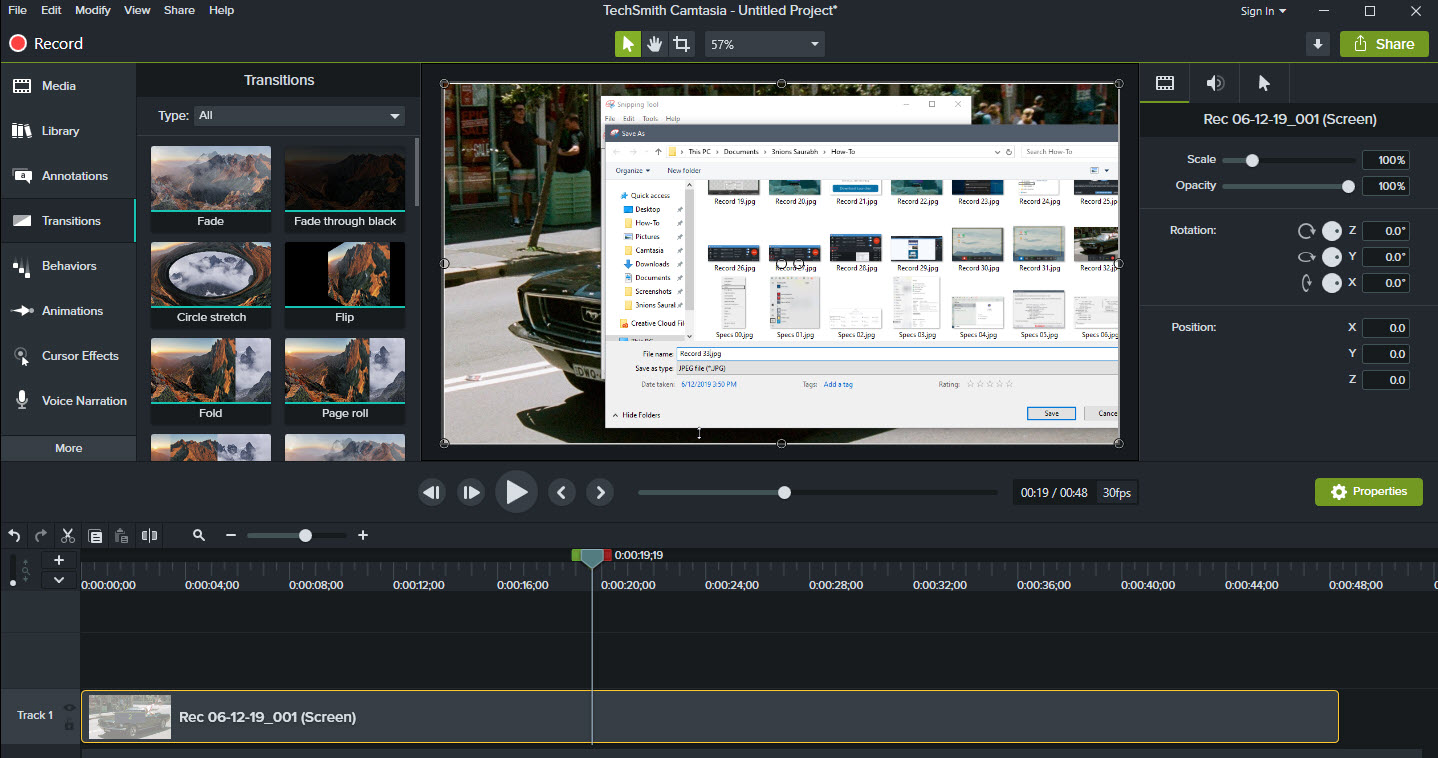 There’s no such option as export as MP4 or render. Click on Share to export the video as MP4 or upload it on social media. 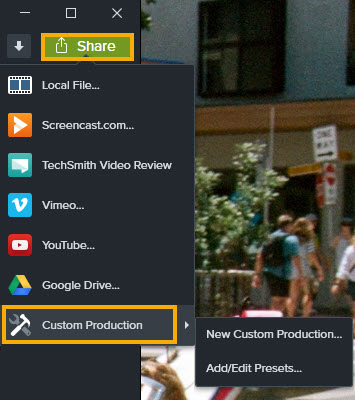 If you liked the trial version, we say go ahead and buy Camtasia which will not disappoint you. It’s the bang for your bucks.

PRO TIP: If you have multiple software installed for screen-recording and your desktop’s a mess, we suggest you pin the folder(s) where the videos are saved in the Quick Access on the left-hand pane of your File Explorer. This way, it will be easy for you to locate or find the jillions of screen-recordings you will be taking. Plus, it would be less frustrating to manage a pile of screen-recordings. 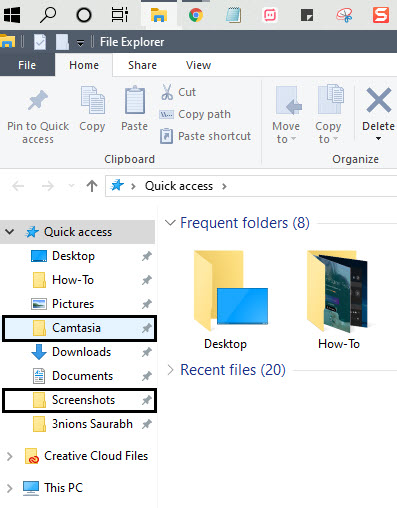 Whether you have to record your screen for tutorial purposes, prepare for a presentation or record that amazing gameplay, such life-saving tools/apps can come in super handy. Try the methods outlined above and see what suits your daily workflow. If you are new to the whole screen-recording thing, we say try out the free ones, that way if you like any, you can settle for a particular option or else you can move on to the paid ones by using a trial version before making the huge payment.

Which method suits your needs the best? Did we miss an amazing app? Tell us in the comments below and don’t forget to share it will your friends who are into gaming, give a lot of presentations, YouTubers or super-enthusiastic nerds who’d love to try some new applications. 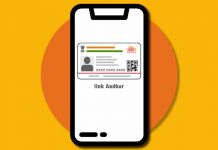 How to Link Mobile Number to Aadhar Card Online 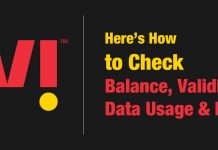 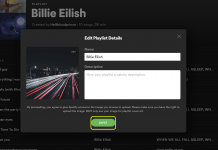