Phone prices are skyrocketing day by day where some even cost about ₹1,37,000 (I’m looking at you Galaxy Fold!) This clearly makes smartphones an expensive investment. Apart from applying a screen guard, purchasing a cover and ensuring your phone, there is nothing else you can do for your phone. But, you can find apps for literally everything and antivirus is one such genre which is much debated. Some say installing antivirus isn’t necessary while some use them with a pinch of salt. There is no doubt that some bad apps that can cripple your phone and antivirus apps are no different. So, instead of downloading some weird apps to protect your smartphone, which it won’t, we’ve brought you 10 antivirus apps which will do their thing.

Clean Master is an app that we’ve all used at some point. Whether it came pre-installed with your shiny new phone or you just used it as a tryout. Whatever the case may be, Clean Master has been a favorite when it came to antivirus. You get the best phone optimization tools for your phone which include space cleaner, antivirus, and managing gameplay. If you download a lot of apps, delete them later and download it again, a set of residual files are created which hog your base memory. But don’t worry, Clean Master will free up your storage by deleting unwanted junk, residual and cache files.

Apart from this oh-so-awesome feature, you also get a free antivirus which scans all your apps to determine if there is any malware. It blocks viruses and trojans from attacking your phone. WiFi is also secured by detecting fake and unauthorized connections. So, protect your phone by installing this app and clean those unwanted files. 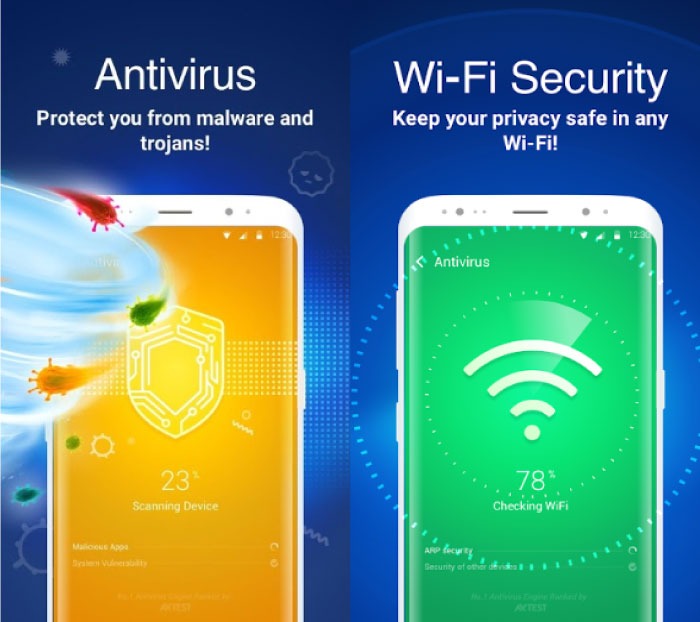 The second most name in the world of mobile security, Kaspersky is the jack of all trades which houses a lot of features in this 45MB app. Antivirus is its main feature as it helms gracefully. The antivirus section acts as a virus cleaner which also blocks harmful malware. You can request for a background check to throw out viruses, spyware, trojans, etc. As already mentioned, a phone nowadays is no less than a piece of jewelry so we need to treat it like one.

There is an option of anti-theft which locks all your personal information from thieves by wiping it. And if you think your relatives snatch your phone to dig out dirt on you, use app lock, which locks your app from people who shouldn’t see what you are up to. With all these features, you get internet security in the form of web-filter which blocks out dangerous links and sites while browsing. Keep your phone safe and download this jack of all trades via the link below. 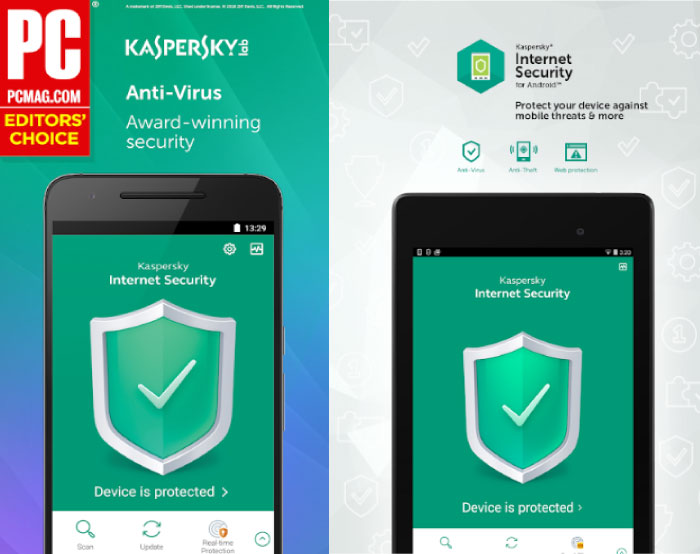 AVG Antivirus is another well-known name when it comes to the protection of gadgets. You get a slew of features with AVG’s antivirus app which not only focuses on the threat online but also the outer one. Its antivirus game is strong which scans all your games and apps with a dual-engine antivirus to remove harmful content. Furthermore, it scans the sites your surf for serious threats. Under the antivirus safety, you can also use VPN connection for safe browsing, along with scanning WiFi for any threats. Performance tab includes battery life extension mechanisms, task killer, upload and download speeds. You also get an anti-theft option which locates your phone via Google Maps, locks your phone and make a siren sound.

There’s a nifty feature called Theftie which emails you a photo of someone trying to unlock your phone. Other functions are the app insights which monitors your app and a privacy tab that has the ability to create a secret vault to hide your media. AVG also aides in spam by blocking calls. So, save your phone by the looming threats and download AVG from the link below. 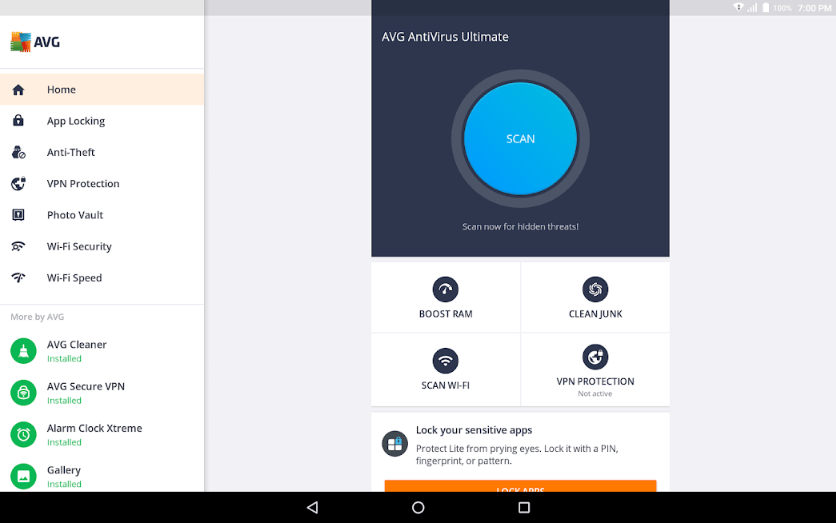 360 Security is an app that provides you a little of everything. It has an effective speed booster which prohibits apps to clog your RAM while cleaning cache in tandem. 360 Security also offers smart battery saver to identify and control apps that drain your battery life. Don’t be worried about viruses or phishing! The antivirus solutions by this app are full proof which frees your device from malware and adware. Supposing, you are unhappy with your existing lock screen, you get a multi-function lock screen which has quick turn on-off shortcuts for WiFi and the likes. Manage notifications and operate flashlight from this lock screen.

To up the security, you get a call and SMS filter to block unwanted guests. Differentiate insecure to secure connections through the app’s WiFi security section. There is an ‘Intruder Selfie’ mode which identifies anyone who’s breaking into your phone which is more of a gimmick is there if you need it. Moreover, you can access this app with your fingerprint scanner so no hassle of patterns or pins. Download this app give your smartphone 360-degree protection. 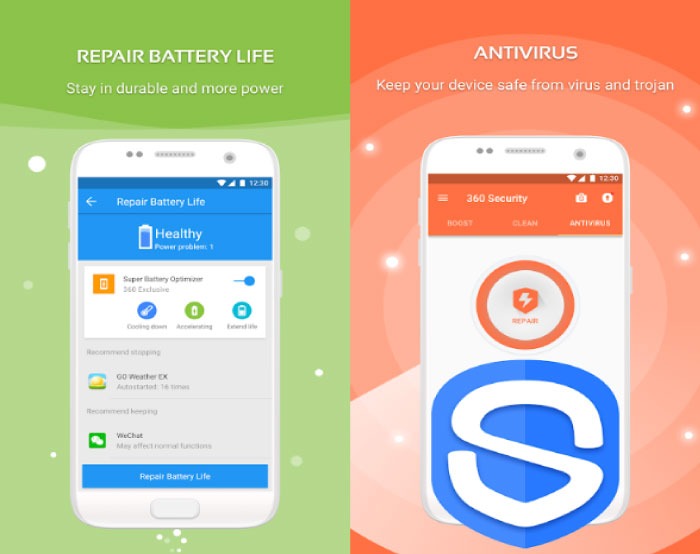 Norton Security by NortonMobile is another best app to protect your phone from viruses. Awarded the ‘Best Android Security 2018,’ Norton impresses with its unique approach to safety. There are features in the premium version, which are free in other apps but it makes a compelling argument to buy those. The free features include a free antivirus scanning system which removes spyware, malware, and viruses that slow your device, upon detection; call blocking to block those annoying salesman calls; WiFi scanning to search for a secure connection and a ‘find my device’ type feature to track your device in case it’s stolen. The premium version has the usual real-time call updates, internet protection, and app advisor. You get a window of 30 days to try the pro version before you pay blindly. So, head on to the Play Store and download Norton Security and Antivirus to free your phone from viruses. 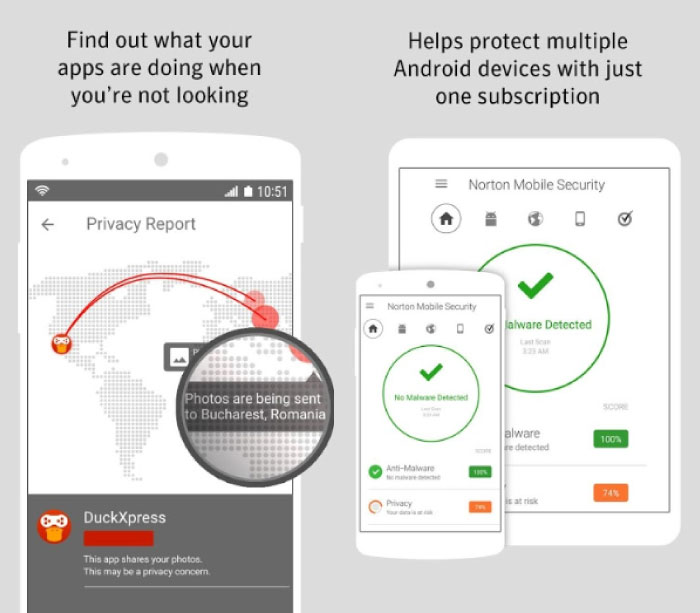 Security Master, as the name suggests, is a master at keeping your phone safe. Originally named CM Security, Security Master aims to improve the condition of your phone by providing you with a whole lot of features. The best feature is its Intelligent Diagnosis, which houses Antivirus, Junk Clean, Phone Booster, Battery Saver, CPU Cooler to achieve a smooth-feeling phone. You get what is known as SafeConnect VPN, which bypasses firewalls and do stuff that isn’t available in your country. This basically hides your IP address to protect your online activity. Other features include anti-theft alarm that triggers an alarm if someone moves your phone, a message security division that hides your messages to protect your privacy and an AppLock functionality that locks connections like Bluetooth, WiFi with pin or biometrics. Give this app a try and download it from the link below. 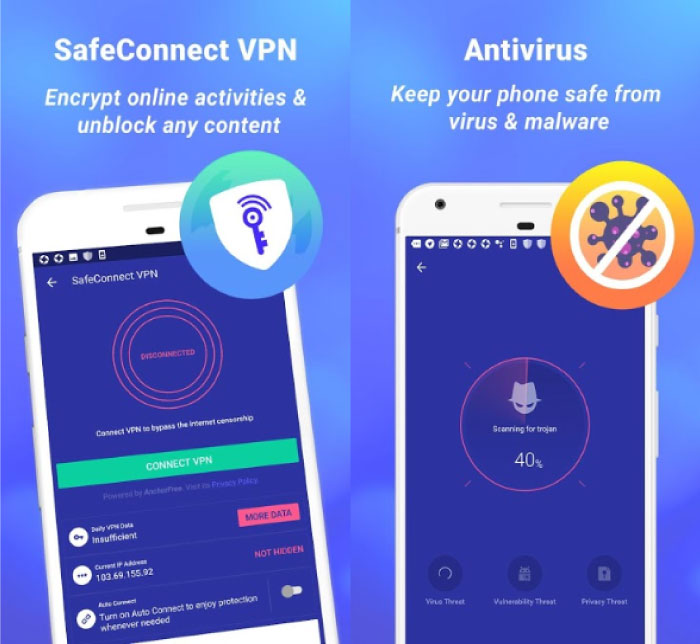 A rather self-explanatory name, Virus Cleaner is an antivirus app that provides with a lot of heavy viruses countering tools that are ought to keep your phone safe. Starting with its Twin Engine Antivirus, it cleans virus by scanning and categorizing it into malware, adware, trojans, and ransomware. There’s a Super Clean option that cleans your app’s caches, residual files, ad junk with just one tap. This frees your phone space and it, in turn, works smoothly. You also get a Phone Booster which basically boosts your phone’s RAM by removing unnecessary apps from the memory. This also comes with a one-tap boost which is super easy. App lock is a function taken for granted. It is present here as well which protects your sensitive apps. Virus Cleaner also boats off about CPU Cooler, WiFi speed test and security, real-time online protection, and a scheduled virus scan. Download this app via the link below and keep your phone buttery-smooth. 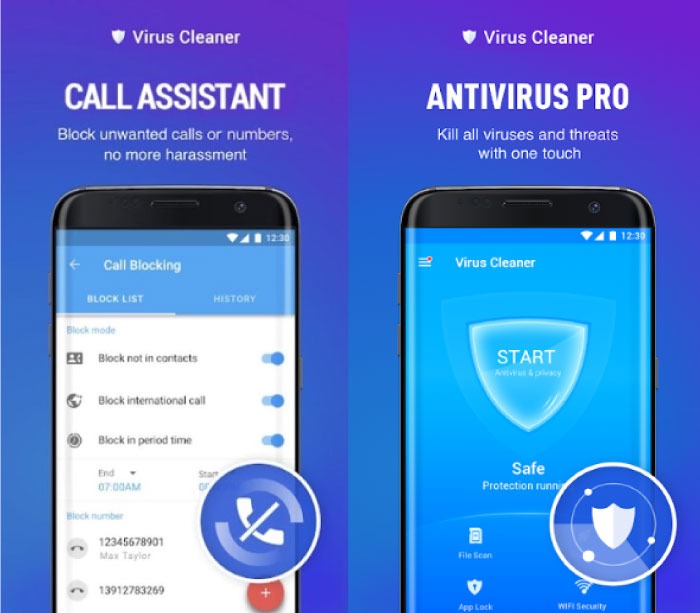 Bitdefender Antivirus is a free virus scanning app that protects your phone in multiple ways. This app uses an in-the-cloud scanning technology which arms your Android device with virus detection. There’s an ‘Auto-Pilot’ mode which 24/7 scans your device for new downloads or existing apps that catches 99% of viruses. The app is ready to deploy all its weapons once it is installed and given necessary permissions. Download the app from the link below and defend your precious phone. 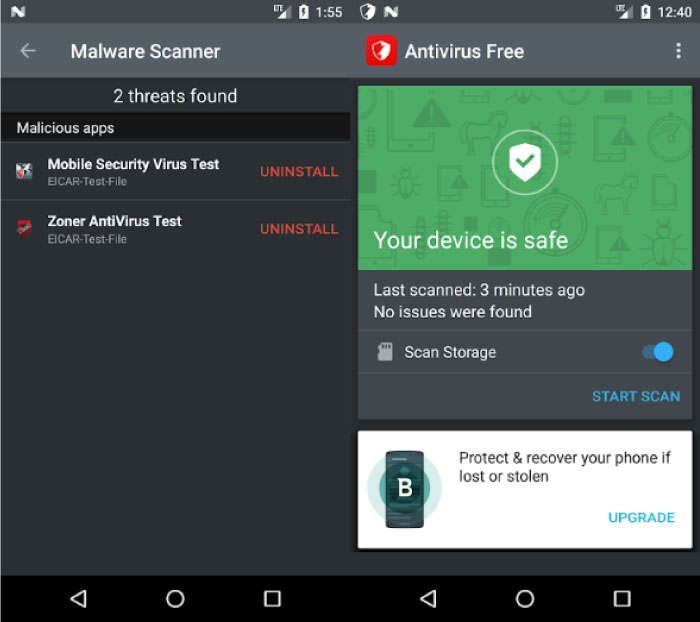 Guard your smartphone with the most reliable antivirus on the Play Store. Lookout is the all-in-one app that gives you the option to safeguard you WiFi, which identifies secure and dangerous public connections and lets you browse safely. There’s a system advisor that looks for root detections. If you aren’t convinced with the free version, buy the premium which has all the bells and whistles. So, download this app and look out for your device. 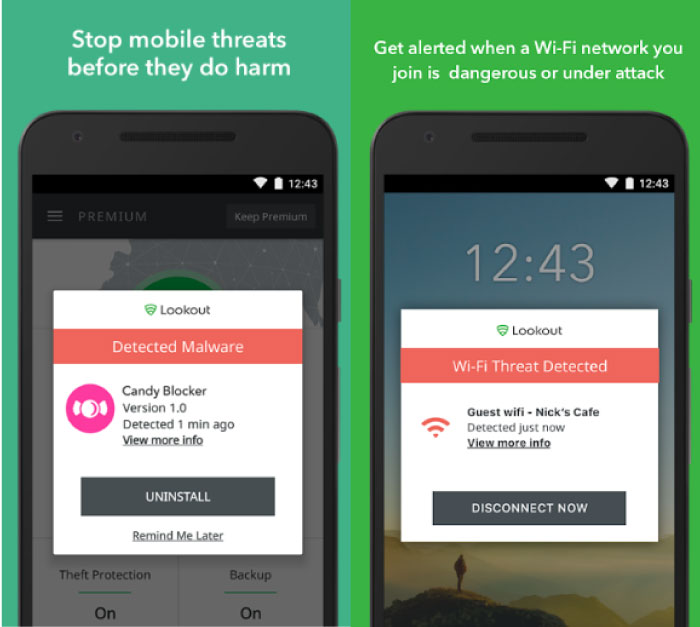 Antivirus Free is the last app on our list which is great at averting viruses. You get powerful tools that remove spyware, trojans, etc. from your phone, keeping it safe and smooth. You also get a tool to clean your phone’s RAM, including killing off cache files. App locker gives you the ability to lock sensitive apps from prying eyes. Heavily cluttered notifications? Declutter it by an in-built notification cleaner. For added security, use call blocker to block unwanted calls. People downloading this app are qualified for free assistance regarding the app. The app’s UI is buttery smooth and makes your phone smooth too. So, head on to the Play Store or click the link below to download this app. 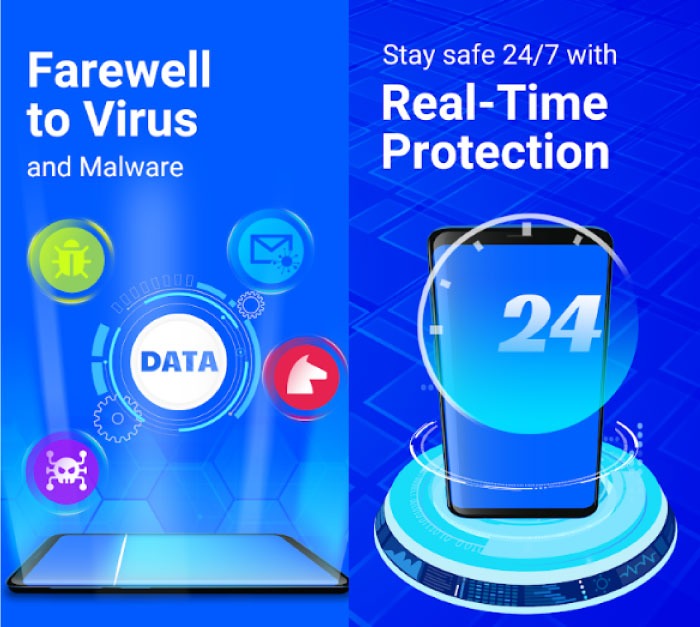 Here were out top picks for antivirus apps for your expensive investment. Do let us know, which app do you use or which ones we ommitted from this last. 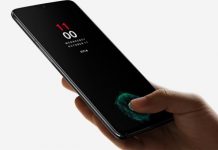 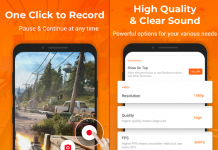 10 Best Screen Recorders for Android in 2020 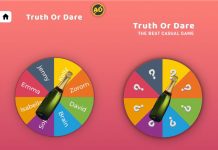