When it comes to daily survival, it’s a 50-50 in the real world. We can’t always start over, which keeps us yearning for the next day to be better. Games have known to divert our attention from the daily hassles. Be it Angry birds to let out the anger or Asphalt 9 for the super fast ride, Android has games which cater to all our needs. One such genre is survival games, which have been popular lately, thanks to PUBG. If you can’t slay your boss, you have the option to kill some 99 people in the game and call it a day or keep on wreaking havoc with the eccentric collection of weapons. Today we bring you 10 best survival games for Android that will make you live vicariously like James Bond or Kill Bill. So, switch on the survival mode and portray a ruthless killer while playing these games.

Worth Reading: 10 Best Android games like Clash Of Clans

PUBG Mobile needs no introduction. Also known as PLAYERUNKNOWN’S BATTLEGROUNDS, it is the most popular survival game which is played by 30 millions of people daily. After rampaging PCs, Tencent launched PUBG for mobile back in 2018, which currently has over 200 million downloads. Often suffixed Battle Royale, this game indeed feels royal in terms of the great graphics, the wide gamut of maps and versatility. Other features include voice chat, anti-cheat mechanisms for a fair game and the ability to team up with your friends and incinerate your adversaries. To fast-pace the game and beat your enemies, you can also commandeer different vehicles like trucks, bikes, and cars.

The maps are constantly added and updated for an adventuristic experience. If your device doesn’t support the graphics PUBG needs, Tencent Games have rolled out PUBG Lite which support all the phones. Keep in mind that, to play PUBG uninterrupted, you should be connected to a stable internet connection. So, hit the download link given below and get ready to jump off that airplane. 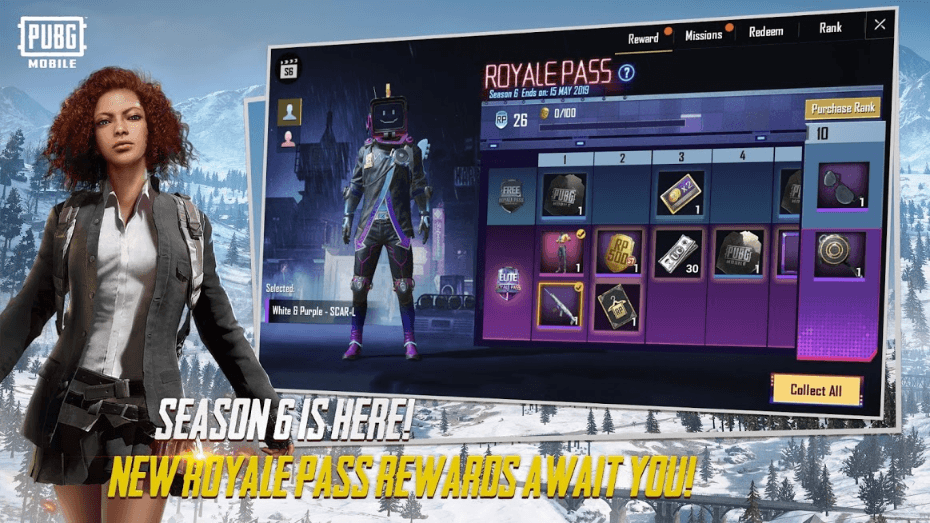 The title pretty much suggests the one line story: Your last day on Earth! You are expected to behave like a man who is supposed to survive past this horrendous lonely day. Only, you are not lonely. The game is set in the post-apocalyptic world of 2027, where the human race was decimated by an unknown outbreak. Those alive soon became zombies and began eating the non-affected humans. unlike other zombie games where you just point and shoot, this game lets you create scenes, weapons or even commandeer animals. You have different maps to choose from for immersive gameplay. So, tap the download link and conquer your last day. 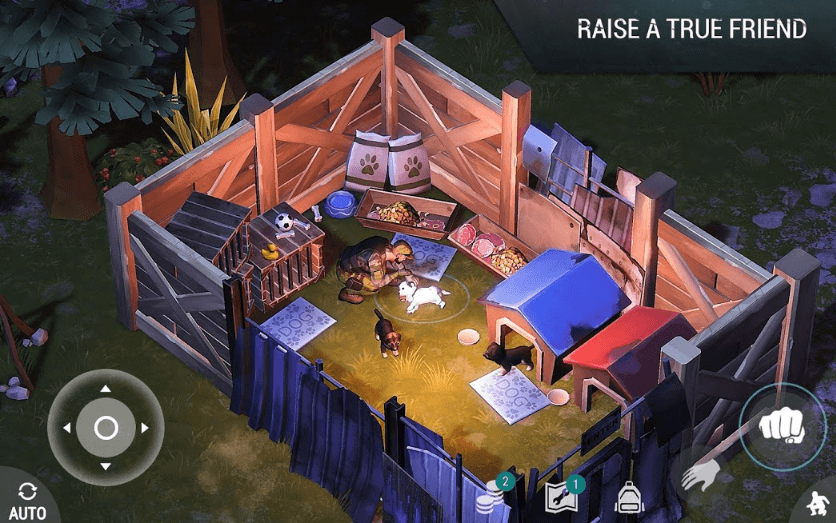 NetEase Games brings you a similar experience to PUBG. Rules of Survival consists of immersive gaming experience with a wide gamut of maps, firearms, and accessories. As the name suggests, you’d have to follow some strict rules to survive and take home the crown of surviving amongst the 230 million players. Another feature similar to PUBG is the ability to choose between solo or team mode. Both modes have fabulous gameplay but we suggest going on the battlefield with a team so that your chances of survival increases. So, head on to the Play Store or hit the download link below to survive the gnarly war. 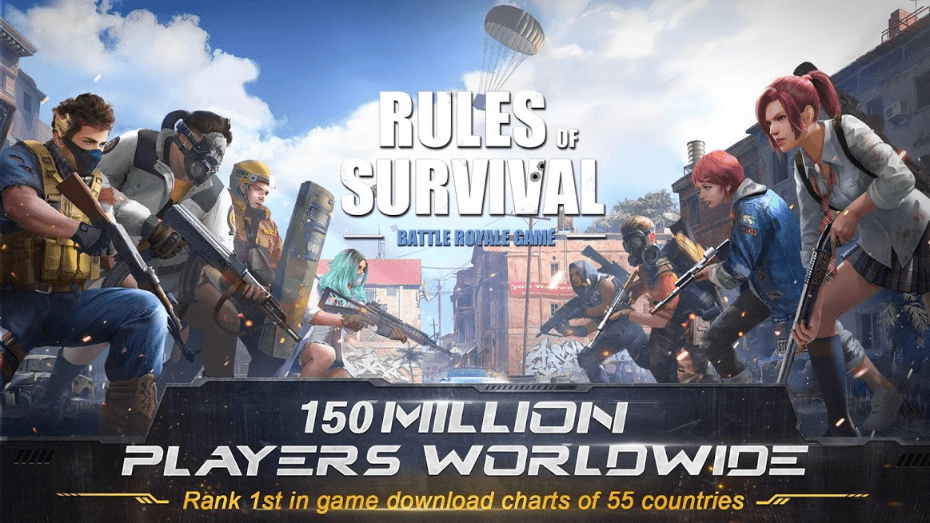 HERO Game has come up with unique gameplay. Named appropriately, Hopeless Land dives into a land where all hope is lost but not must win. With the ability to play with over 120 people, the game gives you unique weaponry and charismatic backgrounds, including various special Asian architectures. The missions are quite simple, wherein you can control numerous vehicles like helicopters or jeeps to get one step ahead of your enemy. This is a game with more strategic gameplay. The battlefields are specially designed to combat the enemies and ride that brand new car.

Another feature which further escalates the quality of this game is an in-voice communicator for better team control, same as PUBG. The movements are designed with motion capture, which gives it butter smooth experience. The controls are easy which can be maneuvered by a rookie in no time. So, don’t feel hopeless and tap the link below. 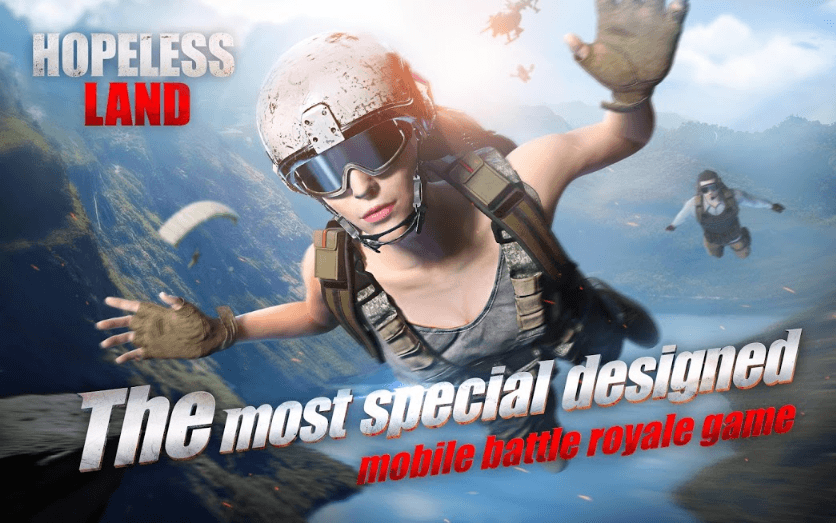 Probably the best zombie shooter game we’ve come across, Dead Trigger 2, a sequel to the adulated Dead Trigger, engages in fun gameplay. Its motto is simple – point and shoot the zombies. This first-person shooter which has different difficulty levels for you to experiment. Dead Trigger 2 has console-quality graphics, which gives other survival apps a run for their money. To further smooth things, players can select between a touch control target shooter system, an enhanced virtual joystick or console gaming. With over 50 guns and 33 different battle arenas, you can pick the one that suits your style and shoot those zombies in the head. The game also lets you choose between a whopping 600 gameplay and start shooting those zombies. 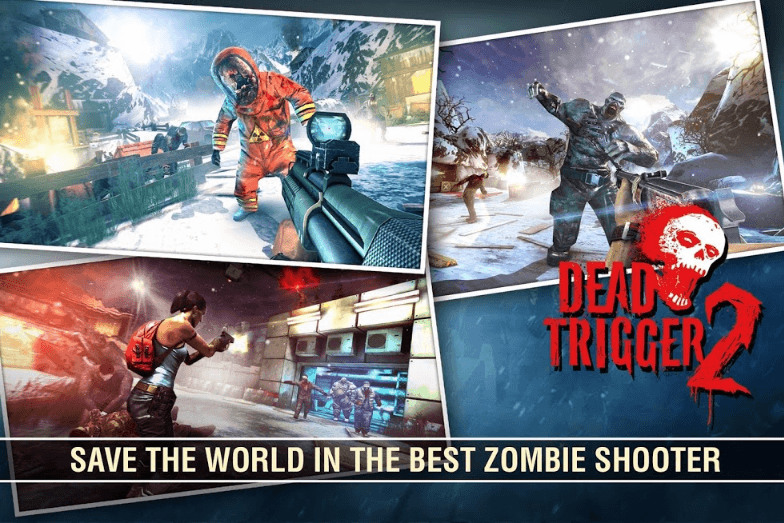 The last Shelter is a Multi-player game which is zombie themed. Players get to build their own empire and defend it against the zombies, which were created by an outbreak. You get to battle zombies across the world and lead other people fighting for their survival. With strategic gameplay, you fight with your alliance against the zombies with R&D, warrior and survivor training and powerful hero recruitment. The graphics are life-like, which gives the gameplay a realistic look. So, jump right into the shelter by tapping the download link below. 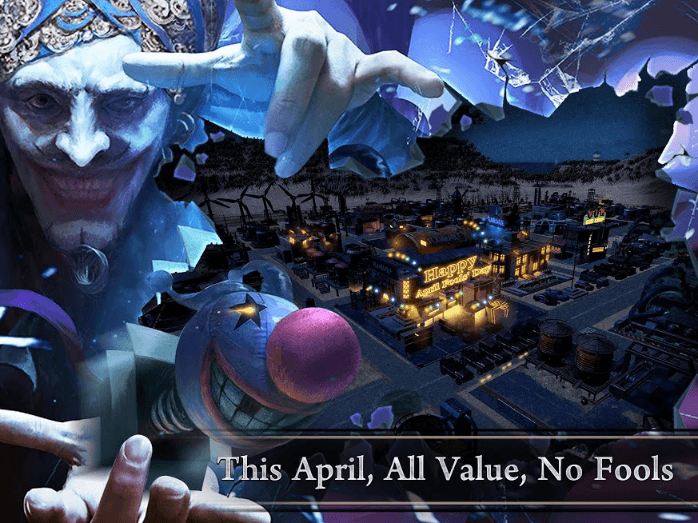 Dinosaurs do seem to peak our interests, be it the Jurrasic World flicks or TV shows or the fossils found sporadically throughout the world. Well, get your hands on the most epic survival game featuring dinosaurs as the main antagonists versus mankind. More than 80 dinosaurs are waiting to be captured and tamed to survive the day. You get to start unarmed, wherein with progress, you can build your fortress and defend it against mean humans and the mighty predators. Another notable feature of ARK is the landscapes, it replicates an experience which us humans never got to lay our eyes on. So, hop onto this ark by tapping the download link given below. 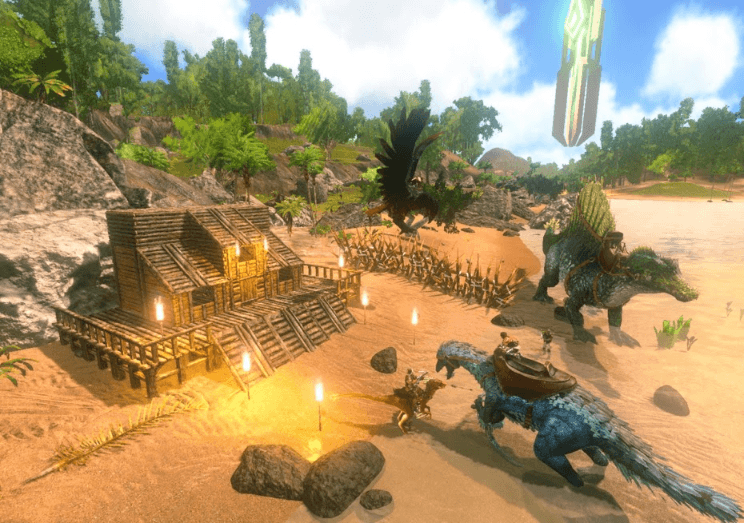 Survival Island by PRIDEGAMESSTUDIO is a must download for gamers who’d like to vacay in an island. Apart from the teeth-rattling adventures, you get to fight enemies who are powerful. Even though you will have to start with the basics – finding food and shelter, once you warm up, you get to battle enemies while exploring the wilderness. There is also an island survival sandbox simulator, which gives you a realistic feel of an island. So, download this game and walk into the oblivion. 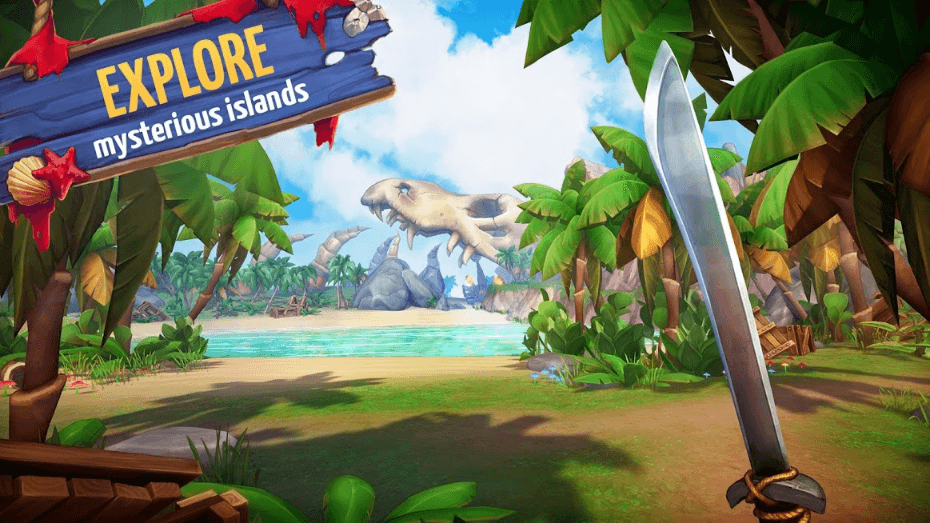 tLt Games give us another survival game but this feature role-playing to experience the immersive gameplay. This game does not go easy on you so take on the challenge to survive pandemic radiation, zombies among other unforeseen situations. With a choice of about 2,700 different locations, you also get to explore the wilderness with deadly animals. Apart from the amazing features, you get a chance to survive a nuclear war and meet other people, hear their stories, while fighting off those deadly zombies along the way. With distinguished weaponry, you get to kill the undead with ease. So, download the link below and make this your day of survival. 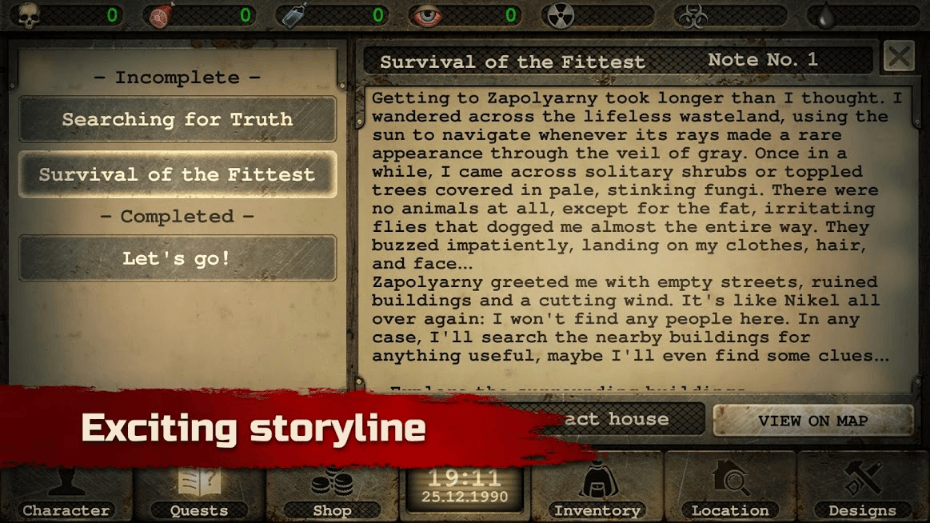 Stormfall is a Massively multiplayer online role-playing games (MMORPGs) that let you master swordcraft and sorcery. The plot follows a lord who’s been betrayed and must start over. To get back at the top, you must survive by crafting and building essentials, learning the secret of magic and taming the wild animals. Defeat the dark souls who will stop at nothing to destroy you once again. Players need to fight off starvation, battle corrupted bandits and fellow exiles and discover the secrets of ancient ruins and wildlands, hunt supplies from across the land. Click the download link below and surrender yourself to the wilderness. 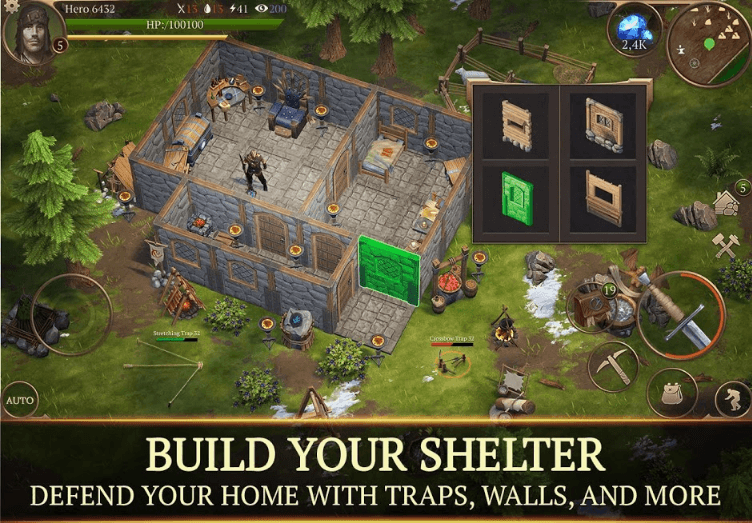 Here were our top picks for the best survival games for Android. While we think PUBG and Dead Trigger 2 has raised the bar rather high, the other games on our list are bang on as well. So, which game would you choose or have already been playing? Let us know in the comments section.