Rummaging the Play Store for a new music streaming app? Got confused by the sheer number of choices? Well, we’ve got you covered. This article aims to answer the most asked question out there: Which streaming services should I opt for? Streaming giants like Spotify and YouTube Music have just entered the market, which has increased the already huge list of streaming apps. Except for Amazon Music and Apple Music, all of these are innately free, however, they ultimately require you to buy a premium version for offline listening.

Streaming music in India has not only become easier but also cheaper as Spotify and YouTube Music has forced local apps like Gaana and JioSaavn to slash its prices by 70%. Even Apple has joined the bandwagon, slashing their prices. Scroll down to find which app deserves your hard earned money.

Google Play Music tops our list as the best streaming services for its simple yet amazing features. It equally promotes its radio functionality as the 35 million-plus song library. The radio is curated by experts for people and is very versatile. The coolest feature of Google Play Music is that you can upload up to 50,000 tracks of your own choice, which seems like overkill but hey, its good to have it no? Users who have already subscribed to YouTube Music can access Play Music’s repository for free. This feels like a buy-one-get-one-free motto. With only ₹99 monthly, this is a deal worth grabbing. So, don’t wait and download the app below to instantly listen to your favorite tracks. 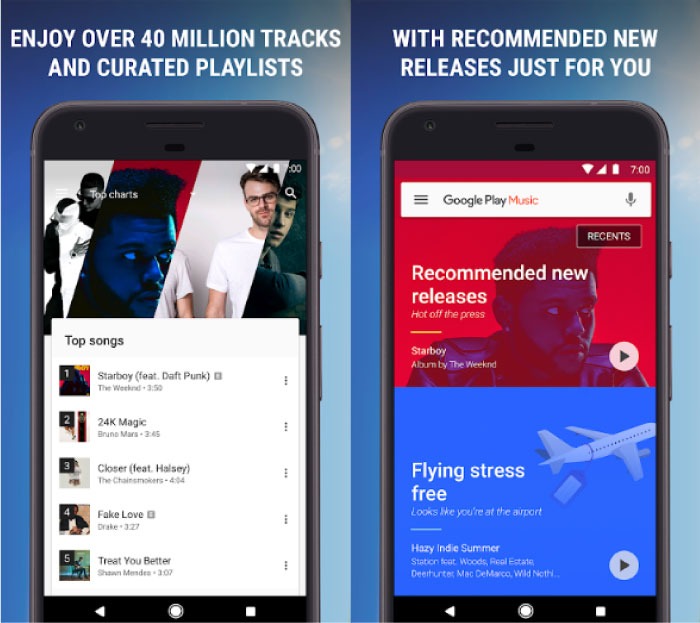 Spotify, the Swedish giant has successfully entered the Indian market and is already proving to be a rival for local streaming apps. With over 40 million songs to choose from, Spotify curates playlists for all your mood swings. Not only does it seemingly play across PC, Android, iOS but also supports devices like Xbox and PlayStation. Another convenient element is Spotify Codes – a way to share your songs, albums and playlists among friends.

The app is innately black so you don’t need a separate option of a dark mode. Moreover, it lets you play high quality of audio up to 160kbps and 320kbps (premium). Annually, a premium membership will cost you ₹1189 (₹13 per day/₹119 per month), which isn’t cheap but worth every penny. Also, if you are a student, you can get a 50% discount if you possess valid identification. So, download Spotify from the download link below and spot your favorite songs. 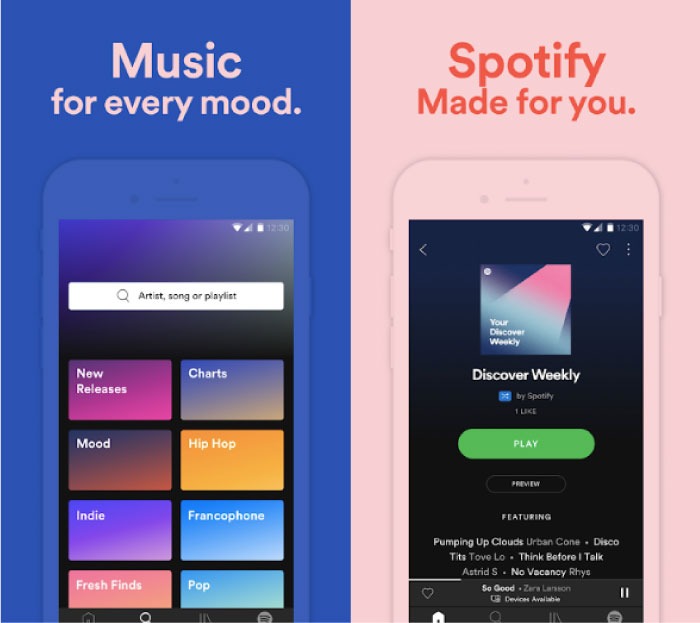 Amazon Music is an add-on feature of a premium subscription to Amazon Prime. This streaming service has a repository of over 50 million songs which offers a 30-day trial (including Prime Video and Amazon shopping). Once the trial period ends, you must buy the yearly subscription of ₹999 to continue listening to the gargantuan track list. Along with playback support for Android, iOS, and Windows, Prime Music also supports Google Home or Amazon’s own Eco Smart speaker. The music collection is impressive but the local archive is rather underwhelming. The audio quality maxes out at 256kpbs (mp3). So, tap the download link below and be at the prime of your life. 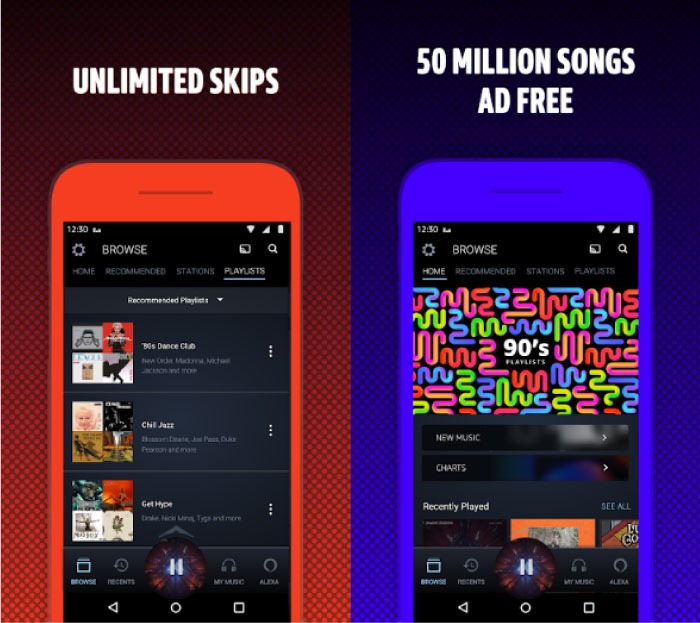 An amalgamation of telecom giant Reliance Jio and Saavn streaming services, JioSaavn is by far the most popular music streaming app in India. It is considered a bang for your buck as it not only offers you a wide gamut of music, but also some exclusive podcasts like Cyrus Says, No Filter Neha and so on. What more, if you are a Jio user, you get 90 days trial as opposed to 7-day trial for non-Jio users.

Similar to Spotify, JioSaavn also has ‘Daily Mixes’, which gives you a daily dose of music curated by the type of music you listen to. This local streaming app also boasts of a 16 language inclusion, which might charm the regional users. The max audio quality is set at 320kbps (paid) while the free version is restricted to 160kbps JioSaavn starts at ₹99, going up to ₹299 annually. So, hit that download link and give JioSaavn a try. 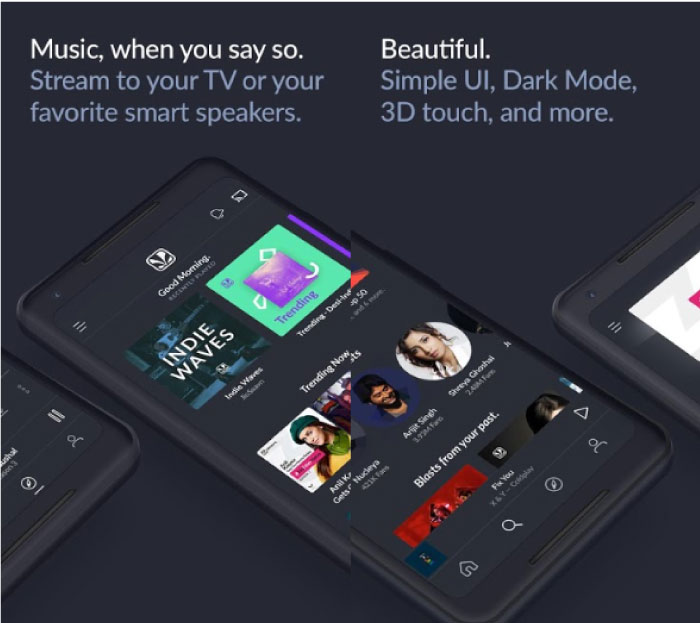 Gaana is by far the most versatile music streaming app, loaded with a plethora of music collection and support for Google Home and Amazon Echo Smart Speakers. With over 30 million songs to choose from, this app also dabbles in English music which comparatively has more collection than JioSaavn. Gaana is the only music app in the list that lets you voice search instead of typing song names, which is super handy. Apart from Android and iOS, it also has a web platform which doesn’t need an account. You’ll have to chip in ₹99 a month for a premium subscription and ₹299 for a yearly plan, which also offers a student discount. So, download Gaana and hum that tune. 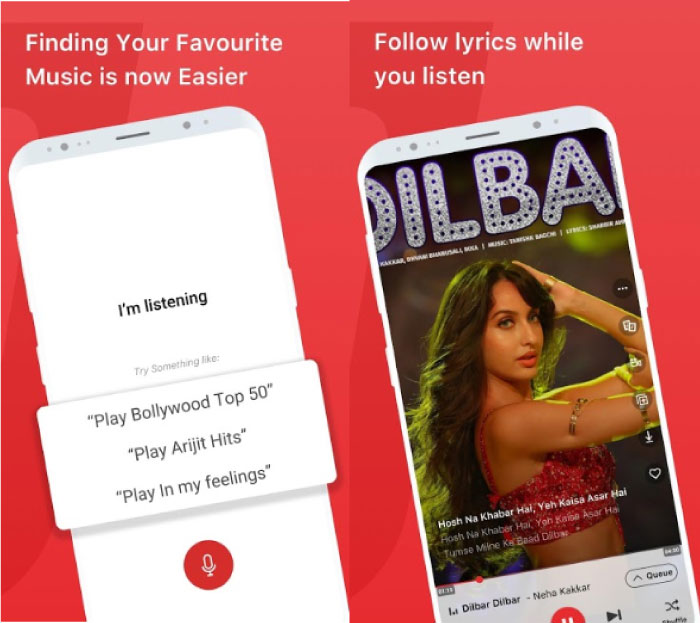 Fetching a crown of the ‘Most Entertaining App of 2018’ on Google Play Store is no cakewalk and Wynk deserves the crown. A repository of over 3 million songs, this Airtel affiliated app dabbles in regional as well as western music. The app uses low data for streaming music. Wynk offers a Plus plan, for which the users will have to pay ₹99 per month for playing the songs offline. However, Airtel mobile subscribers can get their hands on for as low as ₹29. Wynk doesn’t offer much but it might appeal to some of you. So, head on to the Play Store or click the download link below to experience a no-nonsense app. 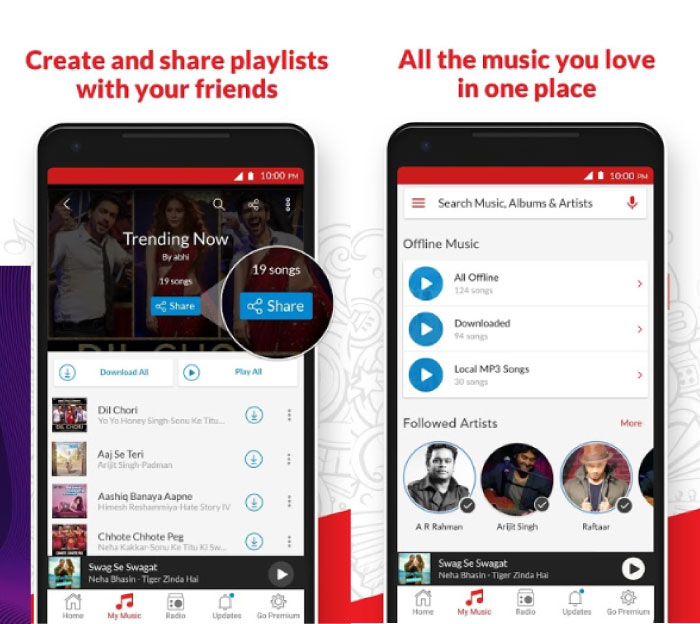 A premium offering from the Internet giant Google, YouTube Music forayed into the Indian market a few weeks ago, giving a stiff competition to its fellow streaming counterparts. You can eventually listen to all tracks with annoying ads on top, YouTube also offers a trial period for 3-months. To sway consumers to their paid section, YouTube Music charges ₹99 per month. You can also opt for a family plan ₹189 month which lets you add up to six accounts. While YouTube Premium, which offers background playback and YouTube Originals, will cost you ₹129. Notably, YouTube Music Premium is bundled within YouTube Premium. Download this app and explore the world of music. 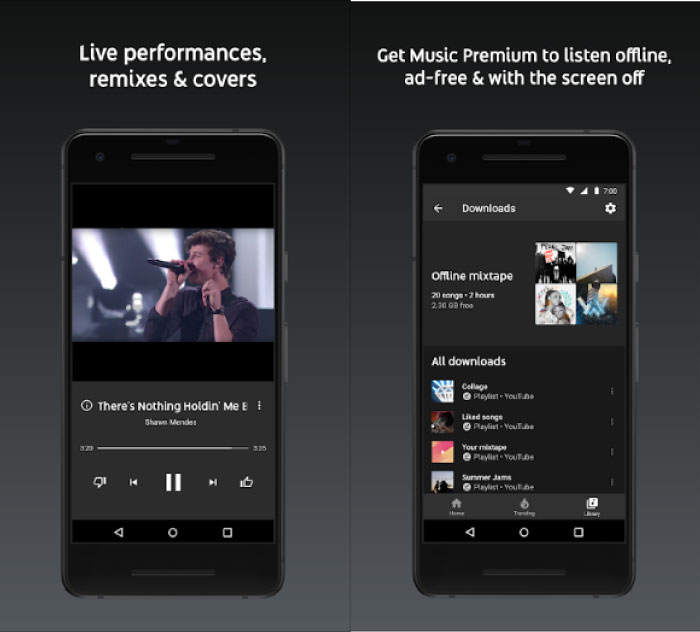 Hungama Music, which has a collection of over 10 million songs, also doubles as a music player to play your other songs. This app supports the usual – lyrics, mood music and so on. Hungama music not only offers audio but also some exclusive music videos. Go berserk with latest hits and if supposedly, you get bored by listening to songs, you can switch on the in-built radio. So, tap the download link below and have fun exploring an ocean of music. 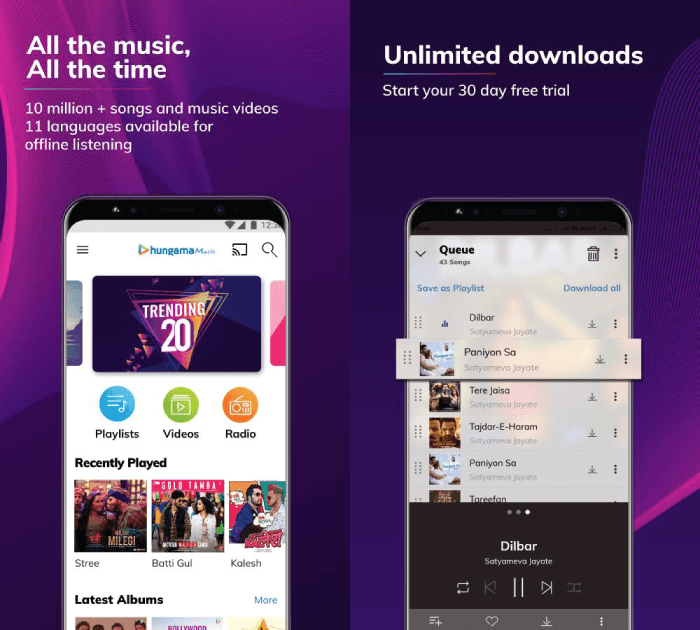 Soundcloud, considered an underdog’s holy-grail, possesses an extraordinary catalog of music, which is highest amongst the other streaming services. Offering 150 million tracks, Soundcloud is the everything-in-the-sink kind of an app which soothes your listening experience by presenting an amalgamation of established and emerging tracks. The best part about Soundcloud is that any budding music composer/singer can upload songs and stream it worldwide. The Soundcloud Go hasn’t made its way to India, but it isn’t missed as there are plenty of features you get by downloading the free version. So, tap the link below and get transported to cloud nine with the soothing collection. 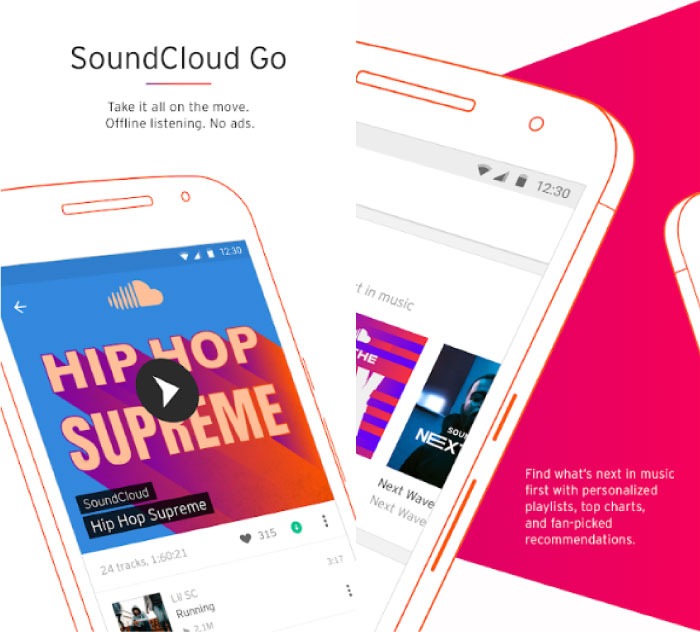 Another list with the inclusion of Apple. Why the last on our list, you ask? Well, even though it offers over 45 million songs, it lacks some features that make local apps like Gaana and JioSaavn people’s first preferences. What other streaming apps lack which Apple is proud of – the ability to search a song by typing a stream of lyrics whose name you don’t know. That is so amazing (Spotify, Gaana, JioSaavn, take notes!) Apple Music also has a nifty little web widget feature that is uber cool. Moreover, this is the only app that’s compatible with Apple watches and Macbook (duh!)

Extending the list of supported features, you can connect Google Home or Amazon Echo smart speakers with Apple Music seamlessly. You also get your hands on a separate station called Beats1 Radio, curated and hosted by real DJs, which is available for only premium users. Apple Music gives you the option of three months of streaming music without any restrictions on a trial basis, after which you must pay ₹99 per month (₹49 for students). The family membership plan is now for ₹149 a month and if you want an annual membership, you’ll have to fork in ₹999. So, head on to the Play Store or click the link below to download the app. 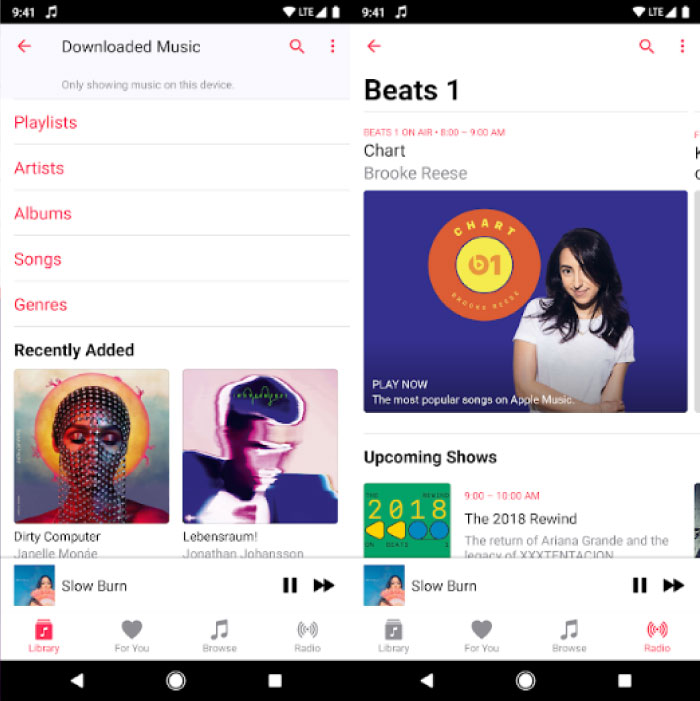 Known as music’s sleeping giant, India is slowly waking up to myriads of streaming services, which is getting cheaper, thanks to the ever-increasing rivalry.

This was our list of music streaming apps for Android. You will surely settle for one of the above apps. So let us know in the comments below, which suits your need.